When I started working on the breed descriptions for Estonian-Horses.com, I got to know Alisa (on Facebook). She was kind enough to give me many photos of Estonian Drafts that I could use on my website. Some time later, Alisa learned that we were doing Barefoot showings and she asked me if I would also come to the village of Vitsiku in Eastern Estonia to try some Barefoot saddles on Estonian Drafts.

We don’t always have test saddles. We hope to have many in the future when our business picks up but right now, we sometimes have two. Sometimes one. And sometimes none. When Alisa contact me, we had one: the “London”. I was still happy to make the trip and get to know Alisa in person, and Tatjana and Liza. Alisa and Tatjana take care of these magnificent horses on a daily basis. Liza has an Estonian Draft herself and likes to spend time with the herd and help the other two girls when she can.

We tried the “London” on an Estonian Draft and it seemed to work quite well. Liza was heavily pregnant at the time so she couldn’t try the saddle very well but her first impression was good enough to spark her interest. We agreed that they could try the saddle for a while and buy it later if they liked it. They liked it! It turns our that the “London” works very well with Estonian Draft horses . (I was happy to communicate this information to Barefoot headquarters in Germany as well. Finally I could tell them something they didn’t already know. 🙂 )

We also went to see the herd… That was something unforgettable. It’s the largest herd of Estonian Draft horses, anywhere. When we reached the pasture, we saw about 130 beautiful grazing animals from a distance. And then they started to gallop toward us. The earth trembled below our feet and then they arrived — like dinosaurs. 🙂 We were so used to the Estonian Native horses that my wife Annika worked with on the island of Hiiumaa that the much larger Estonian Drafts seemed gigantic to us.

They’re very versatile as well. They were originally bred for heavy pulling duty, of course, but nowadays they are increasingly used for riding. They give a very smooth, secure ride. The herd that Alisa and Tatjana work with belongs to Andres Supp who is a legendary horse breeder in Estonia. You can learn more about them from their Facebook group if you want.

Welcome to the Barefoot shop for Estonia, Latvia, and Lithuania! We welcome your calls and messages and are happy to help in any way we can. 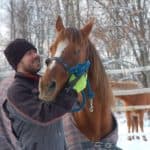 Search
Please get in touch!
How fast can you get it?

You'll see a notice when your chosen product is either in stock or a special order.

You can select your parcel station from a list at checkout.

You can make the selection at checkout.

You're very welcomed to share your Barefoot story on our stories page. To do that, please write to us at mailbox@barefoot-baltics.ee and we'll get you started.